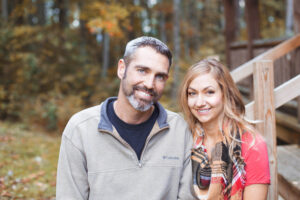 In March 2017, my husband Casey was diagnosed with Stage III rectal cancer. We were already eating a radically different diet than most.  We didn’t eat out anywhere, and weren’t eating processed foods.  The animal products we ate were grass-fed and of high quality…and quantity.  While this got rid of my health problems, it wasn’t enough to reverse cancer.  Even good quality animal products can help cancer cells grow.

The very day of diagnosis, again we turned to food, we did a cancer coaching program called Square One by Chris Wark, a no chemo, no radiation, cancer survivor himself.  This program combines similar things that many long-term natural cancer survivors did to regain health.

We did it together, and saw a difference in the tumor in two weeks!  The tumor at diagnosis looked bloody and blistered and two weeks later, no blood and a healthy color…. like the body was trying to heal!

It seems to get ahead of things, we needed to eliminate the animal products and massively overdose on fruits and vegetables, as those affect multiple pathways that target cancer cells!

We were highly pressured to do conventional treatment, which would have involved 5 weeks chemo and radiation before surgery, followed by four more months of chemotherapy.

Cancer clinics don’t normally tell patients how much treatments are going to cost but we told them that we would not schedule surgery until they gave us an estimate.  The 5 weeks of radiation alone was $200,000!  And get this- they were ready to start treatment the next day, but it took over 5 weeks to get us that estimate!!

During that time, we did a lot of research and we couldn’t find any evidence that the treatment was actually working for rectal cancer and in our research, there were studies that said it was controversial, so my husband declined the chemo, radiation and only had surgery.   We had to wait close to 6 weeks for them to think about allowing us to skip the chemo and radiation before surgery. Eventually the “team” decided to “grant” us a surgery.

During that time, we continued the diet (Square One) and based on an initial MRI at diagnosis, Casey was told he had 3 cancerous lymph nodes, but following surgery there were only two AND his pathology report showed tumor infiltrating lymphocytes, a sign of spontaneous remission aka the immune system kicking in!

In July 2018 I found a new study by the University of Florida of 52,519 people under 50 with rectal cancer showing that the current recommended treatment (chemo/radiation/surgery) provides ZERO survival benefits for patients under 50!!!???? No mention of the side effects it caused, of course.  The study mentioned rectal cancer as being biologically different in young people possibly due to microbiome changes.

That got me wondering what kind of research is out there on rectal cancer and microbiome…. what have they found?

Here are the highlights of my research!

Lachnospiraceae, the good bacteria, is a type of clostridia that feeds on plant matter (fiber) and produces a short-chain fatty acid called butyrate.  Butyrate is known to have substantial antitumorigenic properties, including the ability to inhibit tumor cell proliferation.

What feeds the good bacteria? Starch and fiber from plant foods, and eugenol, a compound found in cinnamon, basil, and cloves. Some studies indicate that eugenol is the key to thickening the mucosal lining in your gut, so that bad bacteria like Fusobacterium can’t penetrate it.

Another study indicates that periodontal disease-causing bacteria (including Fusobacterium) may be connected to CRC, and are found at high levels in tumors.  CRC patients with elevated levels of Fusobacterium have especially poor survival rates.

So, how do we get rid of cancer-promoting Fusobacterium?

All signs point to cutting off its fuel!

The Standard American Diet or appropriately abbreviated SAD diet feeds Fusobacterium and dramatic shifts can be seen in the microbiome with diet changes in a matter of days.

What kills it?  I did find a study about a single plant food that can kill Fusobacterium: wild blueberries!!!

In other interesting news, when I was researching how diet changes microbiome, I came across a guy who tested his poo for 365 days on all sorts of diets.  He tested paleo, raw vegan, vegetarian, Jenny Craig, high fat low carb, and more.  He even lived with the Hadza tribe and got a fecal transplant from one of them!!!!  One thing that stood out was how easily and dramatically he could shift his microbiome with fiber.  He eats Paleo with a lot more fiber than average. He found the average paleo-er eats a sad 19-25 grams of fiber per day, vegan eats 43, and an African kid eats up to 130!  African’s have 50 times less colon cancer!

Another find was that low carb, equaled NO fermentation, so no butyrate and no way to feed the protective Lachnospiraceae!

It turns out this guy (Jeff Leach) wrote a book called Rewild (which I had at my house two days later) and founded the Human Food Project.  I read the book….in one day, it’s that interesting!

Also interesting is that all of this information has been researched but treatment for most cancers have not changed since the 50’s!

The drug recommended for Casey 5-FU (aka Five Feet Under) was patented in 1956 and kills approximately 1000 Americans each year that have a DPD enzyme deficiency.  People without that enzyme cannot break down 5-FU leading to death.  The craziest part of that is they don’t test anyone for the deficiency and 4-8% of the population have it!

Casey is now five years out from diagnosis, he has no evidence of disease per conventional CT, colonoscopy and blood work.

His original CTC (circulating tumor cell count) was 6.2 (advanced disease) then 4.9 (early disease or treatment working) then 4.4, and now 4.0.

We continue to work on the root cause and are hoping to get his CTC count at <2.  Circulating tumor cells are the reason for metastasis, that isn’t even disputed in the conventional world, yet our doctors didn’t want to know anything about monitoring them or why his numbers were dropping.

Everyday in the US, many cancer patients are told they’re in remission without having their CTC’s tested to know for sure.

Here’s a speech I did that explains much more about everything I’ve learned. Those things always stop at the most unflattering places LOL!

* Since doing that speech, I have some concerns about Fenbendazole, so be aware my advice on that is on hold until we have more data.

Below is a speech I did early on.  This speech has some really good info about the cancer industry, that’s not included in the above speech.