Oral bacteria like Fusobacterium are associated with colorectal cancer, and also there are many cases of mycobacterium mimicking cancer.

Pancreatic cancer has recently been associated with a fungus called Malassezia.

L-shaped bacteria (bacteria without a cell wall) are fascinating!

Normally bacteria is classified cocci(spherical), bacillus (rod-shaped), or spiral. At least that’s what we learn in college.

New information (or at least newly accepted) shows that most bacteria when stressed have the ability to change shape and/or lose their cell wall. The method for identifying bacteria is to stain the cell wall, so without a cell wall it can’t be stained for identification and is very difficult to detect. This is probably why a link to cancer hasn’t been made sooner.

What stresses bacteria? Antibiotics are known to stress bacteria and induce change to the L-shape becoming resistant to antibiotics and invisible to the immune system.

Normal bacteria when stressed will  change shape from cones to rods and can shed it’s cell wall entirely to very closely resemble a virus and then it can hijack the immune system by living in white cells and delaying apoptosis beyond the normal 45 day cell cycle. It’s then able to take control of hosts genetic material, which allows it to create proteins that enhance it’s survival.

L-shaped bacteria causes inflammation and has been found in continual presence in ALL types of cancer.

Study- In this study they gave mice fecal transplants from CRC patients and the mice developed lesions with characteristics of malignant tumors!!!  What bacteria was in there? I paid for the full study and several were implicated including Fusobacterium!

Fusobacterium is thought to be the cause of colorectal cancer.

I’ve often wondered if a person with CRC was targeting Fusobacterium with treatment and it didn’t work, what could the reason could be?

Maybe the difference in treatable CRC and advancing CRC is Fusobacterium has switched to L-shape becoming undetectable by normal lab testing and also resistant to most treatment.

Study-This study points to mycobacterium along with a secondary infection with a different bacteria as the cause of most cancers. 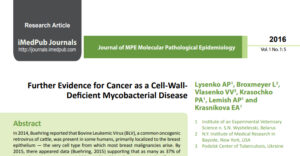 How often is the secondary bacteria found to be Fusobacterium I wonder?

There are many of strains of Fusobacterium, the most virulent one’s shared a commonality with mycobacterium- chorismate mutase domain.

The study shows the average time it takes mycobacterium to induce cancer is 20 years although there have been short term cases as well that document mycobacteria mimicking cancer.

All of this information led me to wonder what kills mycobacterium….

In bladder cancer they use a treatment called BCG, it’s diluted Mycobacteria Bovis to which combats other Mycobacteria strains. It’s the only agent  approved by the FDA as the primary therapy of carcinoma of the bladder.

Other common anti-cancer plant compounds were shown to work such as garlic, berberine, curcumin, EGCG, quercetin, colloidal silver, vitamin C and many more.

I even found a chart with plant flavonoids including the percent they were effective in inhibiting mycobacterium. Top effective substances are listed below and what they’re commonly called.

Mycobacterium or any other L-shaped (no cell wall) bacteria could be the common denominator in how people have cured themselves with different methods.

I’ve been thinking about all the cancer survivors I know and wondering if the method they used to recover could be something that killed a bacteria with no cell wall.

Could killing bacteria without a cell wall be the universal cure?