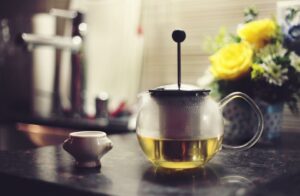 EGCG (Epigallocatechin gallate), the compound in green tea is one of the most anti-cancer compounds known.

In a case study titled  “A Case Report of Unexpectedly Long Survival of a Woman with CLL,” a woman has kept her Chronic Lymphocytic Leukemia  stable since 2001, and as part of her protocol she used high dose EGCG.

In another study headline pictured below EGCG dramatically reduced tumor burden with chemically induced colon cancer in mice!  Wish I could access this study!

EGCG vs Bladder Cancer! Below is a chart of anticancer effect of green tea in animals with bladder cancer.

EGCG  helps stop Metastasis! Below is a chart of the effect of green tea on metastasis in animals.

And if that wasn’t enough, EGCG inhibits Fusobacterium which linked to several cancer types but especially colorectal cancer!  “The tea extracts and components displayed various degrees of antibacterial activity that may involve damage to the bacterial cell membrane and the chelation of iron.”